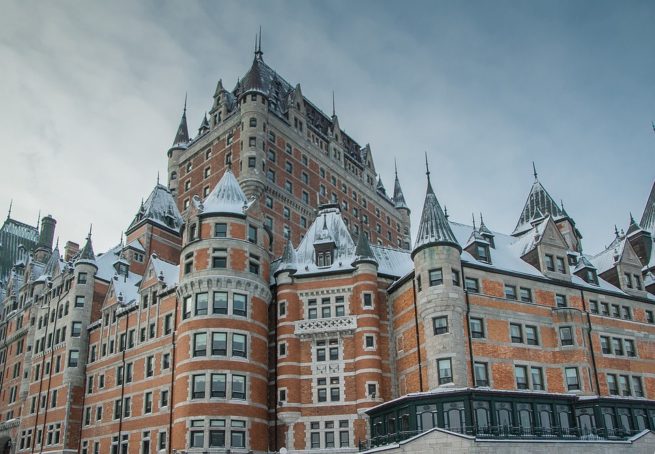 Charter a private jet to Quebec City, the capital of the Canadian province of Québec, and enjoy instant access to private planes across Canada and North America, along with the most competitive rates in luxury and business aviation. Safety is our top priority for every flight, and you’ll gain peace of mind working with a Wyvern certified charter broker.

Although commercial service is available at the city’s main airport, you’re limited regarding the destinations you can reach, and the times in which you can travel. Chartering a private flight allows clients to fly from Quebec City directly to their preferred destination, with access to more than 100x the number of airports available with scheduled airline service. You’ll also depart on on the date and time of your choice, freeing yourself from airline schedules. For private charter flights to Québec, find out more airport information below.

Air Charter Advisors offers access to more than 10,000 private planes based in Quebec and at airports near you, allowing us to find you the best charter flight deals every time you fly.

Choose from a variety of charter planes, including economical twin-engine propeller aircraft, sleek business jets, modern luxury planes, and even VIP airliners. We can accommodate individual travel, family vacations, executive groups, pet-friendly charter flights, and large group charters of up to 150 passengers for weddings, sports teams, and other special events!

Our brokers will present aircraft options for a variety of budgets, including unbeatable rates on empty leg private jet (when available). Give us a call for hourly rates on private planes in your area, and book your private flight to Quebec City.

View all Pistons and Turbo-Props

Charter a private jet to Quebec City, the capital of the mostly French-speaking Québec province, resting on the Saint Lawrence River. The city recently celebrated its 400th anniversary and is home to a remarkable history, serving as the fortress capital of New France since the 17th century.

The region was inhabited by Native peoples for many centuries before the arrival of the Europeans. Samuel de Champlain formally settled Québec in 1608 on behalf of the French to lay claim to the “New World”. The name Québec comes from the aboriginal word for “where the river narrows“, with the St. Lawrence River dramatically narrowing just east of the city.

It served as an important strategic location settled on 200 foot high cliffs, offering stunning views of the Laurentian mountains and the St. Lawrence River. The area was maintained under French rule between 1608 and 1759, when major industries included fur and lumber trade.

Despite losing control of the colony to the British in the Battle of the Plains of Abraham in 1759, the majority of the colony retained their language and religion, leaving much of the French culture intact.

Today, the official language is French, although English is widely spoken as a second language downtown; most residents under 35 speak conversational English, while less than a third of the overall population is bilingual French/English.

You’ll also hear Spanish, German and Japanese spoken around Vieux Quebec. Some French is recommended (and maybe necessary) if you plan on venturing outside of the main areas, depending on how rural you go.

Although the Quebec City revolves around administrative and bureaucratic activity, its vibrant historical center stands out and makes for an incredible visit. You’ll find a variety of interesting sights in the Old Town (Vieux-Québec), which constitutes the walled city on top of the hill.

The surrounding neighborhoods in Haute-Ville (Upper Town) or Basse-Ville (Lower Town) draw thousands of visitors annually, most notably the areas of Saint-Roch, Saint-Jean-Baptiste, Montcalm, Vieux-Port and Limoilou. Upper and lower town are connected by several staircases, each of them being unique, including the Escalier Casse-Cou (Breakneck Stairs) and the more easy to navigate Funiculaire. The Petit Champlain district features cobblestone streets lined with bistros and boutiques, making for a perfect escape from the bureaucratic and administrative routine.

Private planes open the doors to airports not serviced by commercial and charter airlines. Choose to arrive or depart from any of the following airports located within 25 nautical miles of Quebec City, Canada.

For charter rates, aircraft availability, and more information on private jet charter services in Quebec City, call us anytime, anywhere at +1 (888) 987-5387. You can also submit a request for more information via our contact page. Our charter quotes are FREE for all domestic and international routes, and come with zero commitment to book. Instant pricing available over the phone.