A popular destination in the Lone Star State of Texas for private jet charter, Houston is a major hub of industry in the American South, home to one of the busiest commercial airports in the country.

Our company offers the highest standards in executive and leisure air travel, arranging private jet services to/from Houston and surrounding areas of Texas. Our Houston Air Charter Advisors have access to thousands of private planes located in Texas and around the world, from Hawkers, Pipers, Cessnas and LearJets to Challengers, Globals, Falcons, and Gulfstreams. Wyvern Wingman/ARGUS Platinum aircraft available when needed and our team utilizes safety standards and due diligence processes found in Fortune 500 flight departments.

Regional and VIP airliners can also be arranged for corporate group charter, sports teams, air cargo charters, special events and more. Need to quickly travel to business meetings on the other side of Houston? Private helicopters can also be chartered to transport executives within minutes. Luxury ground transportation can also be arranged to bring you straight from the tarmac to your meeting, hotel, or preferred destination.

From bespoke jet charters and last minute flights to jet card memberships and fractional ownership programs, consider us your source for all your private aviation needs in Houston. Call us at 1-888-987-5387 for instant pricing & availability on private flights to/from Houston, TX.

Clients flying private to the Houston area typically arrive at either William P. Hobby (HOU), Sugarland Regional (SGR), or Houston Executive (TME), the most popular private jet hubs in the area; if you’re connecting to a commercial flight, you can arrive directly at George Bush Intercontinental (IAH).

ACA is not limited by fleet size – we work to get you the best deal on one of thousands of aircraft rentals available for your Houston private flight. Every jet & turboprop we utilize for charter service is operated by FAR Part 135 or 121 (or foreign equivalent) air carriers, flown by veteran pilots and never recent flight school grads.

Our team will provide you with a variety of aircraft options based on your goals, allowing you to charter a cost-effective aircraft in Houston, TX such as a Piltaus PC12 or a Cessna Grand Caravan, or luxurious, stylish corporate jets including a Gulfstream G650 or a Dassault Falcon 7x.

Check out our Aircraft Gallery for more details on all of the aircraft we have access to — if you don’t see your preferred aircraft listed below, speak to one of our brokers and they will locate one for you.

Air Charter Advisors is here to become your private aviation solution not only in Houston, but anywhere in the world. We specialize in private air charter service for executive teams, elected officials, celebrities/VIPs and leisure travelers across the United States. 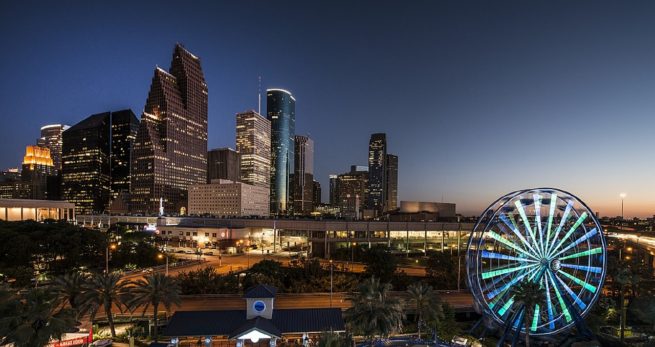 Charter a luxury private jet and enjoy the benefits of private aviation: charter flights to Houston provide increased security and discretion, allowing CEOs and elected officials to travel without distractions or worries. Private flights to Houston also allow you to create your own schedule and travel to thousands of airports commercial service can’t utilize, including several airports focused on general & private aviation in the Houston area.

Clients can quickly arrive/depart using private terminals with luxury travel services offered by on-site FBOs, and your personal Air Charter Advisor will be standing by 24/7 to assist you with any requirements you may have, from arranging gourmet in-flight catering, chartering a helicopter or yacht, making last-minute changes to your flight, or adding additional legs to your flight in Houston, TX.

What to do after your private flight arrives in Houston

The Lone Star State beckons thousands of yearly visitors with its exhaustive supply of daytime fun and nightly diversions. Private Jet travelers in Houston, TX will find some of the world’s most extensive art and history galleries open every day for their perusal. A day in the Morian Hall of Paleontology or the Hall of Ancient Egypt in the Museum of Natural Science will reaffirm your relationship with the past and inspire leisure travelers.

After that, you can head downtown and imbibe some of Houston’s finest spirits. Stop by the new and very popular Anvil Bar & Refuge; hearkening back to the early 1900’s cocktail culture, the Anvil treats cocktail creation like an art in itself. And while these nostalgic cocktail bars are waxing in popularity, there are still plenty of dive, luxury, and sports bars throughout Houston.

Houston also has an intensely popular sports team in the Texans. Stop by one of the aforementioned sports bars on a Sunday and watch a game with the fans, or head to the imposing NRG Stadium and get the visceral and unadulterated experience among thousands of others. Whether you’re visiting for business or for pleasure, check out our list of recommendations after your private flight to Houston, Texas.

Houston is the fourth-largest city in the United States and encompasses an area almost twice as large as its three closest competitors. With more Fortune 500 companies based there than any other city in America, Space City’s economic weight cannot be understated. 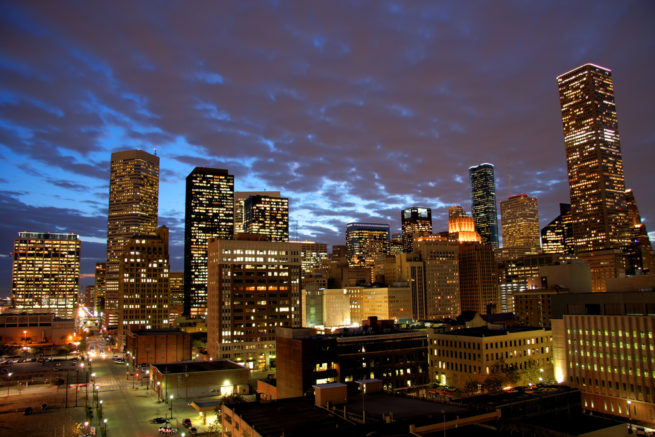 Its status on the world stage as a leader in oil and natural gas only adds to it’s imposing influence, and all of this makes it an exceedingly popular destination for private jet travelers. With several private aviation hubs, landing here puts jet travelers conveniently close to the bustling downtown and business districts.

Air Charter Advisors can arrange a business jet charter for your executive team, review the current market for possible empty-leg flights to Houston, and we can create a supplemental lift program for corporate flight departments and their fleet of business jets. We only work with Wyvern-certified aircraft and pilot with a ton of experience in the plane you’re chartering – we never use a couple of kids fresh out of flight school to save on charter costs.

It’s our attention to detail and dedication to providing the most transparent experience possible that separates us from other charter companies. By going the extra mile, we endow our clients with a sense of security seldom found elsewhere. Read on for more information about how our private jet services can make your business or pleasure trip the best one yet.

Enjoy a Luxurious Stay at a Five-Star Hotel, Resort, or Spa

The colloquialism “everything is bigger in Texas” holds especially true in Houston. With an enormous population of slightly over two million people, the city stands tall among the other heavy hitters in global economies like New York and San Francisco. 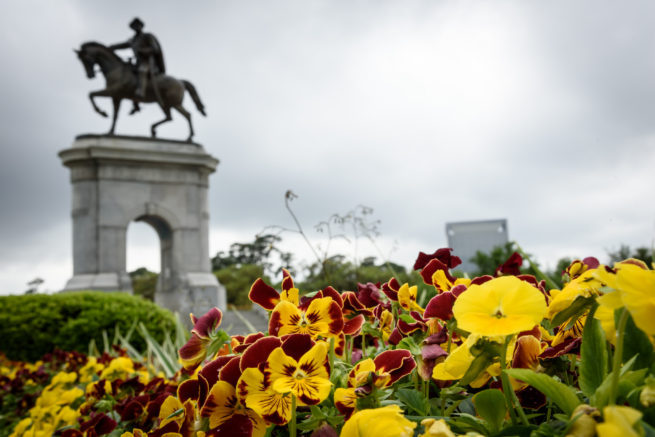 The Texas Medical Center, NASA’s mission control center, and a bevy of corporate headquarters have put Texas up there as one of the most visited cities in the United States. Investors saw this opportunity early and poured millions into Houston’s hotel industry in order to accommodate these visiting professionals.

Now, private jet travelers can spend their nights at award-winning four and five-star hotels in just about any district. The Four Seasons Hotel, Hotel Granduca, and The Inn at Dos Brisas offer some of the most decadently furnished rooms, highest standards in service, and most comprehensive amenities lists found anywhere. Aside from these world-class hotels, H-Town is home to a plethora of other choices ranging from classic luxury to chic and quirky boutique.

Private airports in Houston are found in mass quantities, accommodating charter planes while relieving traffic at IAH. With just over two dozen airports located within 50 nautical miles, you’ll have plenty of options for your private flight in Houston and neighboring areas of the state of Texas.

There are a total of 27 airports within 50 miles of downtown Houston, creating flexible options for your private flight. Speak with one of our advisors to review all the options.

The airport offers 4 runways to handle a large amount of air traffic from a variety of different sized aircraft:

If you’re a frequent private flyer with a preferred FBO, you can choose between Signature Flight Support, Million Air, Atlantic Aviation, Wilson Air Center and Jet Aviation, each operating one of the 5 private terminals located on-site. Speak with one of our brokers to arrange your upcoming flight to (KHOU) William P. Hobby Airport.

Schedule your flight to arrive at George Bush Intercontinental Airport, (IATA: IAH, ICAO: KIAH, FAA LID: IAH), one of the largest, busiest airports in the United States.  It’s located 23 miles north of downtown, and is named after George H. W. Bush, the 41st President of the United States.

(KIAH) George Bush Intercontinental is the second largest facility in Texas, featuring 5 terminals and 5 concrete runways. Each of the runways are long enough to accommodate jets and VIP airliners of any size. There are two FBOs operated by Signature Flight Support and Atlantic Aviation. George Bush Intercontinental is also a focal point for air cargo, ranking as the 12th largest facility for international air cargo.

KEFD Ellington Field covers 2,362 acres and offers three runways with concrete surfaces: 4/22 and 17R/35L are long enough to accommodate any size business jet. The airport is home to nearly 200 aircraft and averages nearly 350 operations per day, with around 70% accounting for general aviation and 20% military activity.

Private business flights heading to the west side of the city can arrive at Houston Executive Airport (ICAO: KTME, FAA LID: TME, formerly 78T), a public-use airport in unincorporated Waller County, Texas. It’s located about 28 miles directly west of downtown Houston, and its closest city is nearby Brookshire.

If you’re planning to travel to the northside of Houston, we can arrange for your charter flight to arrive at Conroe-North Houston Regional Airport (IATA: CXO, ICAO: KCXO, FAA LID: CXO), a county-owned airport located in in Conroe, Montgomery County, about 37 miles north of downtown Houston. It was formerly know as Lone Star Executive and Montgomery County.

Planning on arriving or departing southeast of Houston? We can arrange for your flight to go in/out of Pearland Regional Airport (ICAO: KLVJ, FAA LID: LVJ), a public-use general aviation airport located about 25 southeast of downtown Houston. The airport and its FBO are both managed by Texas Aviation Partners.

Request a Quote or give us a call at 1-888-987-5387 to speak with our Houston jet charter brokers. Whether you’re flying private for a  luxury vacation, business trip, or special event in Houston, Texas, we can locate the right plane at the right price for your flight, offering outstanding deals with some of the most competitive rates at this level of private jet travel.