Charter a Private Flight on the Dassault Falcon 20 Midsize Jet

First introduced in 1963, the Falcon 20 was originally known as the Mystere 20, and the original Dassault-Breguet Mystère 20 prototype (the only one made) is on display at the Musee de l’Air et de l’Espace at the Paris – Le Bourget Airport. After a 25-year production run and several variants, the Falcon 20 remains a popular corporate jet for military and executive travel.

The 24-foot cabin offers one of the longest interiors in the midsize category, accommodating up to 10 passengers (8 comfortably) with adjustable seats and a variety of custom layouts. Due to the age of the aircraft, the majority of Falcon 20s have undergone upgrades and refurbishments, so configurations may vary between models.

For instant pricing and availability on Falcon 20s and similar midsize jets for your charter flight, please request a quote or call us directly at +1 (888) 987-5387.

The cost to charter the Falcon 20 midsize business jet starts at around $3,500 an hour* and will vary based on the year of make/model, dates & time of your flight, scheduling and routing, passenger/luggage totals, and other variables. Looking for predictable costs? Lock in your rates with a private jet charter membership on this and similar midsize jets

The Falcon 20 (Model 20C) was one of the most successful business jets of its era. A total of 508 models were produced during its 25 year prodution, with several variants including the 20D, 20E, and 20F. 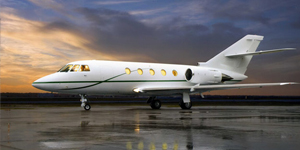 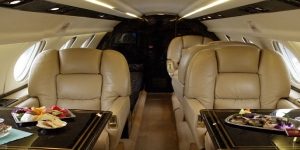 The upgraded Falcon 200 (20H) was introduced in 1980, powered by twin Garrett ATF3-6A-4C engines with an increase to fuel capacity. This midsize jet later formed the foundation that Dassault utilized to introduce their Falcon 10 super light and Falcon 50 midsize business jets.

In the early 1960s, Dassault signed a distribution agreement with Pan American, and by 1968, Pan Am’s Business Jets Division had placed a total of 160 orders. During this time, planes that were delivered to the United States were given the marketing name Fan Jet Falcon, which became known as the Falcon 20.

During the 1970s, a fleet of 33 Falcon Cargo Jets (Falcon 20DC) was utilized by Federal Express for its air express service, until larger Boeing aircraft began replacing them. The Falcon 20 carrying the first Federal Express air express package is on static display at the Smithsonian’s Udvar-Hazy Center at Washington D.C.’s Dulles Airport.

They were also popular with military and government missions, including heavy usage by the US Coast Guard, Royal Canadian Air Force, and the French Air Force. Several countries continue operating them to this day, and there are dozens of them available for on-demand charter.

Need to charter a Falcon 20 for a business meeting, vacation, or special event? Looking into becoming a fractional owner? Maybe you’re interested in access to similar midsize jets by purchasing a 25-hour, 50-hour, or 100-hour jet card.

No matter how you plan on flying, Air Charter Advisors is your source for private jet charter services on the Dassault Falcon 20. Call us directly at +1 (888) 987-5387 or contact us via e-mail with any questions or requests.

* Average hourly rates vary depending on make, model and year; amenities, routing and scheduling/availability, and do not include fuel, taxes, crew charges, ramp, hangar, FBO, overnights, daily minimums, taxes, international fees, catering, ground transport, or de-icing. If you would like an accurate quote, please call or email. Pictures are for example only. The age, color, interior layout, hourly rates, specifications, dimensions may all vary between aircraft. All images copyrighted and provided courtesy of Dassault Aviation unless noted otherwise.