Skip to content
Home » News » Trump and PBI
Previous Next

President Donald Trump officially named Mar-a-Lago, an estate owned by the President, as his Winter White House on January 18, 2017, days before being sworn into office. New restrictions will be in place regarding the airspace surrounding the resort, and will heavily impact both private and general aviation – (PBI) Palm Beach International is one of the busiest business jet airports along the Atlantic Coast.

It’s important for clients in Palm Beach County and those who frequently charter private flights to the South Florida area to take some things into consideration when planning their trips moving forward.

December 2017 Update: As Trump starts traveling to his Winter White House in Mar-a-Lago again, more TFR’s will be issued over the coming months. Contact ACA at (888-987-JETS) for the latest news when flying private to/from Palm Beach County this holiday season and into next year.

What is a POTUS TFR?

A President of the United States TFR (Temporary Flight Restriction) 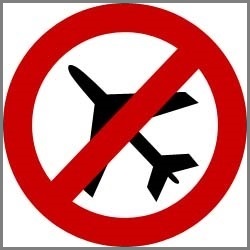 for Palm Beach International Airport (PBI) and the surrounding area will go into in effect whenever President Donald Trump is visiting his Mar-a-Lago Winter White House in Palm Beach, Florida.

These flight restrictions (POTUS TFR) will be put in place within a 1-mile radius, 10-mile radius and 30-mile radius due to the proximity of the President’s Winter White House, and will affect the airspace from the surface to 17,999 feet; the estate is located just 2.1 nm (nautical miles) from from PBI, and lies within the path of Runway 28R’s final approach.

Operators should expect potential re-routes and non-standard routing in the inner 10 nm TFR core, and pilots are encouraged to review specific Notice to Airmen (NOTAM) language each time a TFR is published and active, as details may change.

These restrictions will be in place only when the President is at his Winter White House. Let’s review all of the details regarding the POTUS TFR at PBI.

All air traffic within a 1 nautical mile radius is strictly prohibited.

Commercial and air cargo arriving at or departing Palm Beach International will need to adjust their take-off patterns and approach to avoid this zone.

All aircraft operations are prohibited within 10 nautical miles of Mar-a-Lago except:

Operational procedures include: Continuous radio contact with ATC; continuous squawk of ATC-assigned discrete code; no intermediate stops unless an emergency exists; aside from arrival and departure traffic to PBI, other aircraft operations within the 10 nm inner core will be impacted when the TFR is in active.

Airports within the 10 mile zone:

Inside of the 10-30 mile ring of the TFR, the follow policies apply:

Airports within the 30 mile zone:

What is a Gateway Airport?

A gateway airport is a facility that services a high number of international flights, and is certified by the Transportation Security Administration (TSA) for meeting strict security standards when screening private and non-commercial aircraft.

This means if you’re flying private into the Palm Beach area from a non-gateway airport, passengers will need to stop at a TSA-approved gateway airport for screening before re-boarding and continuing to their destination.

This may potentially force private charter flights originating from non-authorized gateway airports to land at FLL or MCO for screening before continuing to PBI during a TFR.

Gateway Airports for POTUS TFR include:

The NBAA has advocated to increase the number of gateway airport locations to include three northern gateways at Westchester County Airport (HPN), Teterboro Airport (TEB) and Washington Dulles International Airport (IAD), with the aim that these gateway airports better reflect business aviation and allow for additional flexibility. Temporary authorization has been granted for departures until further review.

Operational data at Palm Beach International for outbound traffic indicates a high volume of departures outside of the proposed screening times, and the NBAA is working to expand gateway screening hours to better accommodate business aviation in one of its largest markets.

The Mar-a-Lago property has a bit of an ironic history given the current circumstances.

Mar-a-Lago, which in Spanish means “Sea-to-Lake”, is an estate built in the mid-1920’s by an heiress and socialite named Marjorie Merriweather Post. After she passed in 1973, the estate was bequeathed to the nation with a hopeful intention.

Post had envisioned her estate as a future winter retreat for American presidents and foreign dignitaries, however, successive presidents declined to use the Mansion – President Richard Nixon was in office at the time of Post’s passing, and preferred his own Florida White House in Key Biscayne, not to be confused with the Harry S. Truman Little White House in Key West.

Jimmy Carter was not interested in using the property either, and after both Nixon and Carter declined to utilize Mar-a-Lago, it was returned to Post’s estate in 1980, becoming a National Historic Landmark the same year.

Donald Trump would go on to acquire the estate in 1985, and in 2016, Trump was elected President of the United States of America, realizing Post’s vision for her estate as a presidential retreat nearly four decades after being rejected by previous administrations.

In 2012, the American Institute of Architects’ Florida Chapter created a list entitled “Florida Architecture: 100 Years. 100 Places” in which Mar-a-Lago was ranked fifth overall.

Today, the resort frequently hosts events such as the International Red Cross Ball, an annual “white tie, tails, and tiara” ball, and is known to attract wealthy socialites and ambassadors from across the world supporting the mission of the American Red Cross. It also attracts many celebrities and VIP guests for private holidays and romantic getaways; Michael Jackson and Lisa Marie Presley honeymooned here in 1994.