Air Charter Advisors offers cargo & freight aircraft services on the Ilyushin Il-76, a four-engine multi-purpose aircraft with more than 5 decades of dedicated military and civilian use. 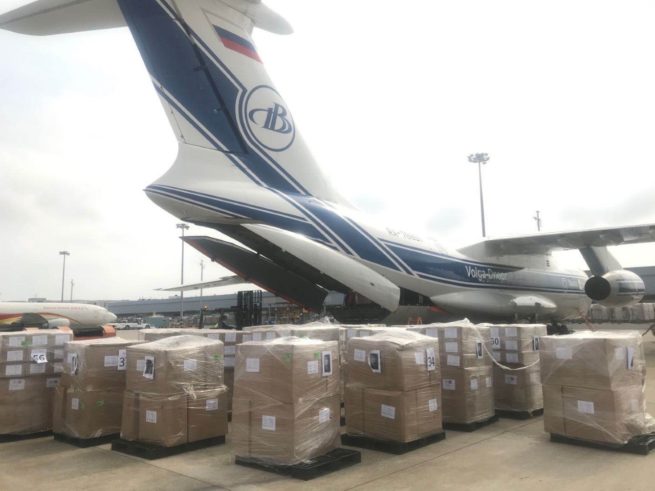 The Soviet Union’s Ilyushin design bureau initially started on the Il-76 in the late 1960’s, with the goal of designing a freighter capable of hauling a 40 ton payload over a distance of 5,000 km in less than 6 hours.

And, since it was likely to see operations in Siberia and the Arctic regions of the (at the time) Soviet Union, it needed to be able to operate from short and/or unpaved runways, as well as dealing with extreme conditions.

Once all of these requirements were met, the first Il-76 took flight in March of 1971.

Although they serve as civilian aircraft in the United States, they currently serve as either civilian, military, or both in nearly 40 countries worldwide. Since they can operate from short & unpaved runways, they serve pivotal roles in military & humanitarian response for nation’s with undeveloped regions, while also capable of delivering large payloads around the world for virtually any purpose.

Il-76s have seen extensive service for ramp-delivered cargo, especially for over-sized & heavy items unable to be otherwise transported. It also sees action as an emergency response transport for disaster relief, evacuations, and humanitarian aid around the world. Some models have even been specialized for for aerial firefighting and zero-G training.

Like many Russian and Chinese aircraft that serve both military and civilian roles, the Il-76 is also given a NATO reporting name; these are common western names assigned in place of their original designations. The Il-76 was given the name “Candid”.

Some of the models that are available for cargo & freight charters include the Il-76M / Il-76MD; built without military equipment and designated as Ms and MDs (Gordon – ‘Falsies’); Il-76T / Il-76TD; a dedicated transport variant; and the Il-76TD-90VD; a modernized version incorporating PS-90 engines to meet global noise restrictions.

* Based on the Il-76TD unless specified

* Specifications are based on common models and may vary based on model, variant, modifications, and other factors. Please call or email us with the dimensions and payload of your cargo. Pictures are for example only. The age, color, interior layout, hourly rates, specifications, dimensions may all vary between aircraft. All images copyrighted and provided courtesy of Ilyushin unless noted otherwise.