Book your private charter flight to Manila, the densely populated capital city of the Philippines located along the eastern shore of Manila Bay. 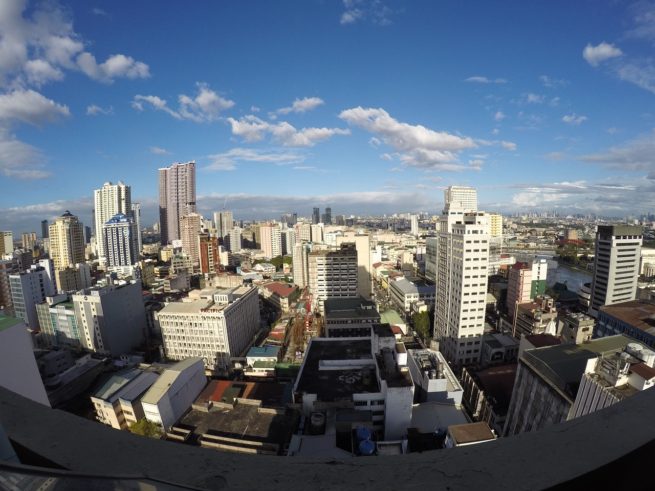 As a global city, it’s a popular business destination for executive jet charters, and a range of educational institutions, scientific centers, sports facilities, and international events draw nearly a million visitors every year.

Air Charter Advisors offers on-demand private jet charter service to/from Manila, and with access to thousands of certified charter aircraft around the world, we’re confident that we can arrange the right aircraft for your trip, whether you’re flying internationally or domestically.

Our jet charter company is Wyvern-certified, and all of the private aircraft we use for flights to the Philippines are operated by FAR Part 135 (or foreign equivalent) air carriers. Our growing list of distinguished clients includes royal family members, heads of state and C-level executives from major corporations; we’ve also booked charter flights for celebrities, personal assistants and leisure travelers from all corners of the world.

Enjoy the convenience and peace of mind you get from working with a charter broker you can trust, and our Manila Air Charter Advisors will be your global aviation solution for private air travel and aircraft sales/management.

Call or request a quote for your charter flight to Manila, Philippines. We’re here to assist you with all of your private aviation needs, from booking your private jet and creating its flight itinerary to arranging gourmet in-flight catering, luxury ground transportation or satisfying any other requests you may have – consider Manila Jet Charter your one-stop shop for all things private aviation in the Philippines.

Manila, the second most populous city in the Philippines following the former capital Quezon City, has a population of nearly 2 million people, while the its metro area accounts for over 12.8 million people. The city’s small land area and huge population make it the most densely populated city in the world, housing over 41,000 people per square kilometer. The city is located around 800 miles from mainland Asia, however, it’s cultural influences originate from the other side of the globe, and date back nearly a half-millennia.

After taking Mexico, Spanish conquistadors sailed westward across the Pacific until discovering Manila in 1571. The Spaniards constructed walls around the city known as “Intramuros” and turned it into the capital of the “Spanish West Indies”, while missionaries brought Christianity to the island, and baroque churches, cathedrals and monasteries were built. Manila would go on to become one of the earliest examples of globalization, connecting Spanish America (Mexico) with Asia as the centerpiece of Spanish activity in the Far East.

Manila and the Philippine archipelago was under Spanish rule for just over three centuries until 1898, when Spain surrendered the city over to the United States, and a new charter was drafted to include the surrounding 15 districts into the city. Japanese occupation of Intramuros during WWII led to the bloodiest battle in the Pacific theater during WWII; the city was bombarded into oblivion, leaving virtually nothing behind from its colonial era.

The city was reconstructed, but replacing historic Spanish colonial-era buildings with modern ones erased a lot of the city’s character and helped to westernize it. Newer architectural styles reflect American, Spanish, Chinese, and Malay influences, while some reconstruction efforts around the Intramuros district help to maintain a sense of “Old Manila”.

Manila is predominantly Christian with Roman Catholics accounting for over 80% of its population. Both Filipino and English are recognized as official languages, although English is the most commonly spoken language in education and business institutions. Private jet travelers will find that English is also commonly spoken throughout the metro area, so visitors shouldn’t have much of an issues communicating with locals.

Manila is the center of education, business, and transportation in the Philippines, and the city welcomes nearly a million visitors from around the globe every year, leaving no shortage of things to do. The Philippines have also been more in-tune to Western and European trends than any other Asian nation, creating an environment that has fostered more political, cultural, civic innovations than anywhere else in the region, which is easily reflected in the city’s way of life today.

The city is split into 16 districts, all of which were originally their own towns except for one, the Port Area District, and each district offers unique landmarks, attractions and cuisine. Intramuros, translated from Spanish to mean “Within the Walls”, is home to Old Town, and its medieval walls and Spanish colonial-era churches make it a must-see. Malate and Ermita are the two most popular tourist districts, and it’s where you’ll find colorful hotels, universities, parks, gardens and other attractions. Malate is also home to the city’s best nightlife.

Dubbed as the “shopping mecca of the Philippines”, the Divisoria district features numerous shopping malls, but if you’re a real mallrat, then head over to SM Mall of Asia, currently ranked as the 4th largest mall in the world. Binondo was the oldest Chinatown in the world and the city’s former center for business, finance, and trade before the Spaniards arrived; it’s still one of the largest Chinatowns in the world, and its the place to go for exotic Chinese goods and cuisine. Manila is also home to a variety of museums, many of which you can find in the Ermita district. If you’re flying private to Manila on a leisurely visit, we’ve compiled a list of the top attractions in the city.

Manila is the nation’s premier center for commerce, banking and finance. The Port of Manila is the largest seaport in the country, making it the number one international shipping gateway to the Philippines. The International Container Terminal Services Inc., recognized as one of the top five maritime terminal operators in the world, is headquartered in the port, conducting its main operations from here as well. The country’s petroleum industry is a major factor in its economy, and it’s home to three of the nation’s largest companies, Caltex Philippines, Pilipinas Shell and Petron Corporation.

The Central Bank of the Philippines is headquartered here, and a variety of universal banks in the Philippines are also based in the city, including Landbank of the Philippines and Philippine Trust Company. Other major industries in the area include retail, transport, tourism, real estate and media, including advertising, theater, fashion, and the arts. Manila has grown to become one of the top countries for outsourced work, and there are entire office buildings and districts designed to handle hundreds of outsourcing accounts. If you’re planning to visit one of the city’s outsourcing firms, a private charter flight is the best way to get there.

As it stands, the Philippines has only six official entry points by sea, and all of them are located in the south. Although air travel the most practical and reasonable way to get here, the city’s primary international airport is known as one of the worst airports in Asia – terminals aren’t internally connected, and you have to drive between terminals to connect flights. Because of this, business and executive travelers prefer to charter a business jet into Manila over flying first-class.

Manila Jet Charter can arrange for your executive flight to land at Ninoy Aquino International Airport, located just 4 miles south of downtown. If your business trip is taking you a little further north, Clark International Airport is another option located about an hour and a half north, closer to the city of San Fernando. Corporate and executive travelers looking to fly private to Manila can benefit from the level of service. Our private charter brokers are Wyvern Certified, utilizing safety standards and due diligence processes that meet and exceed the requirements several Fortune 500 companies apply to their own corporate fleets.

The private aircraft we use for charter flights to/from the Philippines are all operated by FAR Part 135 air carriers (or foreign equivalent), and we aim to provide competitive, fair quotes for each and every trip. Our team diligently reviews the details of the most recent Wyvern PASS reports for pilot safety, aircraft maintenance and operator history when arranging your private flight to Manila. After booking your next private flight with us, you’ll know you have a partner you can work with for every flight you need in the future.

Manila is home to a variety of outstanding five-star hotels and resorts for our private jet charter clientele to choose from. The Manila Hotel is an iconic luxury hotel overlooking the South Harbor, and its central location to several attractions make it a top choice for luxury travelers. The Bayleaf, located in Intramuros, is another top luxury pick, and its penthouse restaurant 9 Spoons offers daily international cuisine. The Bayleaf’s restaurant is also equipped with a built-in stage, modern audio and lighting systems, and it can be booked for weddings and other events. Regardless where you decide to stay, our private air charter team can arrange for luxury ground transportation after your private charter flight arrives, bringing you to the resort or destination of your choice.

E-mail us or give us a call at 1-888-987-5387 to speak with one of our Manila Private Air Charter representatives for your next luxury charter flight, or corporate air charter service. There’s no commitment required, our rates are competitive, and our service is top notch!