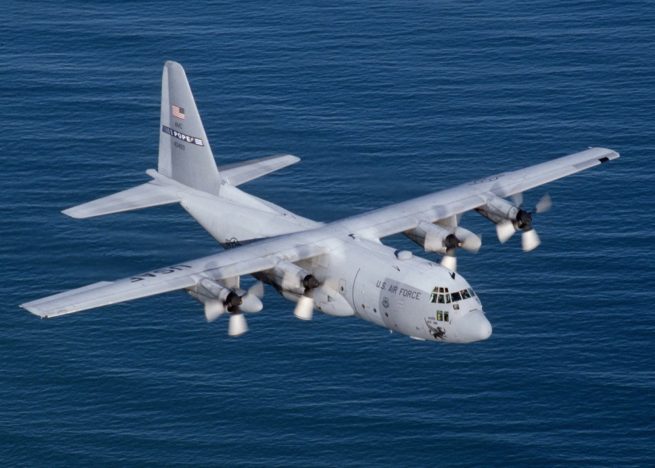 This large cargo aircraft entered service in 1956 with the United States Air Force, becoming only the 5th aircraft with 50 continuous years of service with its original customer in 2007. The Lockheed C-130 Hercules is designed to operate using unpaved runways, and was originally intended to serve as a transportation, medevac, and cargo aircraft with a 20 ton payload capacity and 2,000 nautical mile range.

Over its more than 60 years of service, the Hercules family of large cargo planes have been utilized for a variety of military, civilian, and humanitarian aid missions around the globe. The airframe has proven to be quite versatile, with a variety of uses including gunships, airborne assault aircraft, search & rescue, scientific research, weather recon, refueling, maritime patrol, and firefighting roles.

The C-130 Hercules is still under production as the updated Lockheed Martin C-130J Super Hercules, making it the world’s longest continuously produced military aircraft.  More than 40 variants of the C-130 were produced, including civilian versions marketed as the Lockheed L-100, with many still in service across than 60 countries. Models C-130A/B/E/F/G/H/K/T were the main line of tactical airlifters, with several early models currently retired and on display.

Examples of the payloads the C-130H is capable of hauling include one of the following: 92 passengers; 64 airborne troops; 74 patients with 5 medical crew; 6 pallets; 2–3 Humvees; 2 M113 armored personnel carriers; or 1 CAESAR self-propelled howitzer.

* Specifications are based on common models and may vary based on model, variant, modifications, and other factors. Please call or email us with the dimensions and payload of your cargo. Pictures are for example only. The age, color, interior layout, hourly rates, specifications, dimensions may all vary between aircraft. All images copyrighted and provided courtesy of Lockheed unless noted otherwise.